In the last days I received multiple requests to translate my posts for foreign readers, as they have very limited information about the happenings in Ukraine. I've been monitoring situation in Kiev for several days, and here's the chronicle of todays events, translated to English. Russian version is here. Sharing and distribution is appreciated.

thanks to Dmitry for translation. Morning of February 19:
- It is difficult to get into Kiev and move around. Underground railway is not operational, because of the pretext possible terrorist attack, entrances to the city are blocked too. Some reports about main roads being blocked by trucks with sand. Last night all cars, which went to the Maidan were searched. Airports are still working.

- Information from other regions: At Lviv, Ivano-Frankivsk and Ternopil protesting mob seized the regional administration building, then MIA field offices and prosecutors, which were defeated. In Ternopil there was also captured armoury. In Lviv, the police refused to fight with the opposition and lay down their arms.

- Statement by Klitschko: "Yanukovych has inadequate reaction to the situation. Everything he said - is that the opposition leaders have urged people to stop the confrontation on the Maidan and lay down their weapons. I believe that the government should immediately withdraw security forces and stop the bloody opposition, because people are dying. And I said this to Yanukovych. While bloodshed, which negotiated could be? Unfortunately, he doesn't have understanding of the situation".

- Yanukovych's silence has run out, he appealed to the people where he is blaming the opposition. But he does not want to use force, and wants to talk.

10:19 (8:19) At the Maydan, home of Unions is still on fire, there was headquarters of the Maidan units. The building has collapsed overlap between floors. All rescuers had to leave the building.

10:33 (8:33) Almost all night watching the live broadcast, and have a feeling that the security forces stopped at least 30 meters from the scene awaiting for the orders.

10:40 (8:40) Security forces are trying to surround the Maidan and use new ways, on the other hand Maidan strengthened with new barricades.

10:44 (8:44) The General Secretary of the United Nations Ban Ki-moon called to the authorities and the opposition in Ukraine with a propose to show restraint and avoid further violence.

10:49 (8:49) In a burning house of Unions ceilings has collapsed. Previously 40 people have been rescued.

10:55 (8:55) Kharkov "Freedom" opposition office was set on fire, same happened to "UDAR" party office in Krivoy Rog. "They tried to open the window grille. But They did not succeed. Then, breaking a window, they threw a Molotov cocktail inside," - said the head of the executive committee of the party Viktor Shcherbina.

10:57 (8:57) Ukrainian Interior Ministry blamed the House of Trade Unions "Right Sector" in the fire on. They believe, that they set fire to hide the presence of explosives in the building. 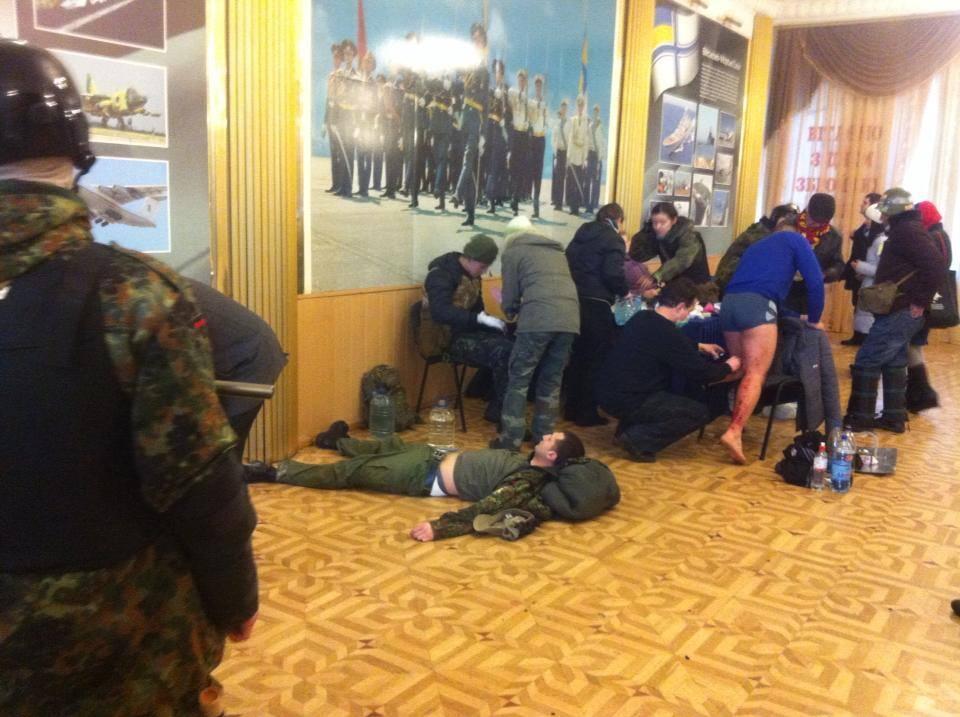 11:33 (9:33) Dalia Grybauskaite (President of Lithuania): "The international community should take all possible measures to help Ukraine and stop escalation of the conflict, as well as to find a peaceful solution."

11:42 (9:42) Train Ivano-Frankivsk, Kiev had stopped because of info about the explosive device.

11:50 (9:50) At the entrance to the Maidan there is traffic of cops with automatic weapon

11:52 (9:52) UEFA has not found grounds for cancellation Europe League match in Kiev.

11:54 (9:54) 40 people were blocked on the road at the crossing point "Krakovets" on the border with Poland, throwing the road by tires and other objects. The area becomes a traffic jam of several dozen trucks.

12:00 (10:00) Espreso.TV broadcasts from the stage of the Maidan, they are calling to substitute young men, standing on the barricades for all night. They got too less forces, but they need to prepare new barricades with necessary, because nobody knows, what will happen in the near future.

12:53 (10:53) Public transport is translated into enhanced mode. Kiev subway is still closed because of the threat of terrorist attacks.

12:57 (10:57) Facebook page of Evromaydan SOS published a list of detained activists. According to their information at 5.00 on February 19 is more than 50 people in the police.

13:12 (11:12) In the violence and killing must blame President Yanukovych, whose had "blood on their hands," tweeted Sweedish Foreign Minister Carl Bildt.

13:15 (11:15) The Canadian Embassy in Kiev closed after the defeat - formerly Deputy Chief of Investigation Department of the Ministry of Internal Affairs of Ukraine Oleg Tatars reported, that "Group of unidentified armed men with sticks broke into the Canadian Embassy, where began to destroy property." According to him, the attackers attempted to inflict bodily harm to the staff of the embassy.

Earlier, the press secretary of the Canadian Foreign Minister Adam Hodge said that the Government of Canada has no claims to a group of demonstrators - " who had taken refuge in the Canadian embassy in Kiev."

He noted that "The safety of the Canadian Embassy is not in danger ," Those people who had taken refuge in the building protestors behave peacefully , did not cause any damage to the property and no harm to employees "

13:21 (11:21) Its now true, that in Kiev were sent paratroopers to protect warehouses with ammunition and weapons

13:26 (11:26) Head of Ukraine Olympic Committee, the famous athlete Sergey Bubka said he was willing to do everything possible to stop the violence in Kiev. Multiple world champion admitted that he was shocked by what is happening in his country.

13:29 (11:29) Kiev police opened criminal proceedings in connection with the murder of the journalist from newspaper "Vesti" Vyacheslav Veremei.

13:57 (11:57) The Security Service of Ukraine has begun the pre-trial investigation into the attempt to take power by "certain politicians".

13:57 (11:57) in Uzhgorod city, protesters entered the building of the Transcarpathian Regional State Administration

14:04 (12:04) Law enforcement agencies began an offensive on the Maidan, the police began to use water cannons and try to push people.

14:31 (12:31) European Commission President Jose Manuel Barroso: Events of last 24 hours in Ukraine, were shocking and its a complete disappointment. There are no circumstances which may justify or legitimize such scenes. We express our deepest condolences to the victims and their families. We strongly condemn the use of violence as a way of solving this political and institutional crisis. Responsibility for providing protection of fundamental rights and freedoms lies on the political leadership of the country.

14:45 (12:45) U.S. Vice President Joe Biden said that the Ukrainian government "has a special responsibility for the settlement of the situation" in the country. In this case he personally told to the president of Ukraine Viktor Yanukovych in a telephone conversation, TV channel CNN.

15:06 (13:06) The call to stop the riots in Kiev from Ukraine Olympic team in the country. Appealed to opposition parties

15:07 (13:07) The commander of the Interior Troops of Ukraine Stanislav Shuljak said, that five soldiers killed Feb. 18, were shot with a sniper rifle.

15:33 (13:33) Minister of Interior Zakharchenko said, that the responsibility for the killed and wounded at Independence square - on opposition politicians.

15:33 (13:33) Minister of Interior Zakharchenko said, that the responsibility for the killed and wounded at Independence square - on opposition politicians

15.59 (13.59) Unconfirmed: Minister of Internal Affairs of Ukraine Vitaliy Zakharchenko wrote in his resignation on Wednesday, February 19. This info was reported by Ukrainian online edition "Obozrevatel".

16.10 (14.10) Russia now thought about money and future risks (finaly good decision) Its now under the question providing to Ukraine the second tranche of the loan.

16.20 (14.20) In Lviv, protesters occupied city police department. Earlier, on February 19 was reported that opposition supporters seized the building in Lviv Oblast Prosecutor's Office and the Security Service of Ukraine. In other regions:
In Kharkov Nationalists party office is burned.

16.26 (14.26), the Pope called for an end to violence in Ukraine:
"With an alarming heart watching the fact that these days takes place in Kiev. Assure the Ukrainian people in their spiritual closeness and praying for the victims of violence, for their families and for the wounded "

16.43 (14.43) Information about the police of Lutsk, who have sided with the protesters is confirmed.

17.10 (15.10) The European Parliament issued a press release: The bloodshed must be stopped at all costs.

17.20 (15.20) Its said, that in Kiev begins to disappear Internet and mobile communication.

17.25 (15.25) Protesters stormed the building of the National Council of Ukraine, and medicines for pharmacies can not pass to Kiev. its stopped at Control Points.

17.32 (15.32) In Kiev, problems having started with food.
Self-defense forces of Lutsk city rides on the Maidan.

17.35 (15.35) Chernivtsi region Governor Michael Papiev wrote in his resignation to the President, after collecting opposition signatures, that there will not be riots and bloodshed in this case.

18.02 (16.02) Yanukovich says that he is legitimately elected president. And as the guarantor of the Constitution, it shall ensure the rule of law. Calls on the leaders of the opposition to stop conflict and says, that there will be kinda elections - and people will decide everything.

18.28 (16.28) Storm of the square has not begun. Maidan still in the place. Security Service of Ukraine threatens of massive antiterrorist operation across the country.

18.34 (16.34) Women brought food to the square, in the best traditions of Maidan society culture.

19.07 (17.07)
Immediately, lots of news:
Washington annulled visas to several officials of Ukraine.
Klitschko appealed to Ukrainians: Power of Yanukovych should go. Cause for only Yanukovych is responsible for the murder and terror against civilians.
Ternopil BERKUT forces down their arms and go to Maidan.
New Maidan headquarters equps in the National Council for TV and Radio building, located at Khreschatyk street, 24

"There is not a lot of police at Instytutska street. Their function is like at simply not to give Maidan expand. Plenty of plainclothes officers. At one of the photos you may see how works the forensic expert. Also drove another water cannon. House of Unions is on fire. Molotov cocktails thrown by both sides. Policemen noticeably tired. Gunfire and explosions continue "
(Igor Cherezov)
19.31 (17.31) On Maidan right now:

20.56 (18.56) Troops from Dnipropetrovsk are landing at the base of MOD in Vasilkov.
20:58 (18:58) EU Member Countries reached a preliminary agreement to impose sanctions against those who responsible for the escalation of violence in the Ukraine.
20:59 (18:59) Girls are disassembling the road.

21:12 (19:12) Here is the first release of those who was killed during confrontations in Kiev

22:07 (20:07) The building of regional parliament is being assaulted in Jitomir.